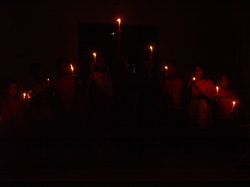 After founding it in 2009 in the month of February, it was occasionally started in June 1, 2011. With great hardship the academy was started, but after passing just 1 year it has now starting to fire. When it was 8 June of 2011 the new orientation classes were taken over the student. Then the students simply realized the importance of orientation class and concentrated on their study. In middle term examination they did well. Finishing that and realizing the more importance of final examination the teacher along with the teacher took another step to have a better result than middle term. With having confidence, intelligence, reality they also did well as they want. So, finally they made their teacher and guardian happy along with them. It is now 2012 and the students are making the good use of time with concentration and realization. Hope they will keep it up.
NONDON KANON ACADEMY